I am going to apologize upfront. Even a day after seeing the Broadway production of Kinky Boots, I am still on a theatre high and I am hoping this post isn’t full of too many extravagant theatre similies and the overuse of jazz hands.

The real secret to taking in a Broadway show without having to pay the price of miniature horse is a theatre lottery. Two and half hours prior to the show, you place your name in a lottery and if chosen you are allowed to purchase tickets with a partial view for a lower price, which in this case was $37.50 compared to $85 and up. It was a crisp New York City night so the odds were in our favor and on the tenth pull my name was called. 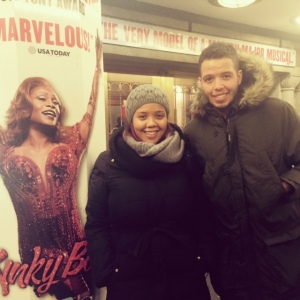 Our seats were in the top left balcony, which was so close to the performance, the urge to hop on stage to improvise, hit me a few times. I guess they have to categorize these seats as partial view, because well if they called it anything else how would the full ticket purchasers know they were a part of the elite.

The theatre itself was intimate, the stage full of simplicity and charm, the actors overwhelming talented and because I would like to just get to the point, the play was spectacular. The story of Kinky Boots is one of two men taking their different paths to the discovery of the person we all want to be, which is really just the assurance that we are meant to be ourself. And it is the help of a pair of kinky boots that help them to accomplish that. The most amazing moments for myself came from the singing and stage presence of Billy Porter, who plays Lola. He may have played a Drag Queen on stage, but beyond the costumes, it was his voice that gave me goosebumps. 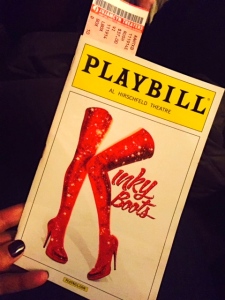 In an effort to be honest with my audience, I will admit, I did shed a couple of tears during the round of applause at the end and it was for good reason. This play was a wonderful reminder that there are ways to escape the constant demand of the modern world we live in. It also made me reminisce of all the wonderful theatre experiences with my Aunt Jinx as a young girl. We would sing tunes from Showboat like we were understudies waiting to be called in. But most importantly that this city can feed every part of our soul that needs to be nourished. I felt alive after that play and after singing every shuffled song on my iPod in the car like it was my final appearance on Broadway, it all kind of came full circle. This is the city I was destined to be in, where I would be assured that I am the person I was meant to be and for that New York City deserves a Broadway bow. Until next time.

← Brooklyn Bowl
The City to Save Christmas →

2 Comments on “Thank You Broadway”