Thirty one posts later, it feels good to have a creative outlet and blog to document all of my new adventures in New York City or forty74 as I have affectionately shortened the coordinates of the big apple to. Lucky for me I sometimes get the chance to travel outside those coordinates and discover new ones. This past weekend, I drove four hours South to Washington, D.C. for the first time ever on a trip with two men I adore the most.

My dad has been talking about a family trip to D.C. for months now and we finally grabbed enough vacation time between the three of us to take advantage of passes to tour the White House. The tour was shorter than the wait, but nonetheless beautiful and allowed my brother to ask the Secret Service a burning question. In case any of you are wondering, the president does not wear his slippers around the East Room.

We spent the rest of the afternoon checking off major monuments, a welcomed itinerary since I was a D.C. newbie. The Washington Monument, Lincoln Memorial and MLK Jr. statue were wonderful to see, but even better to experience with my dad since I knew it meant so much to him. 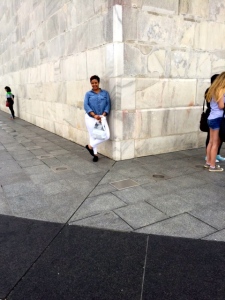 Lunch at a pub was suggested by a Secret Service Agent himself, as he put it, it was “where all the Secret Service Agents go.” A location I refuse to share until the official nuptials of myself and an agent have been announced. All the walking helped to work off the fried cod and as much as I hate to admit it, after checking into our hotel at 6, that was just about all the excitement I could handle on three hours of sleep. Which now that I think about it, could of been New York’s way of telling me I could go to another city, but she didn’t want me to enjoy it. 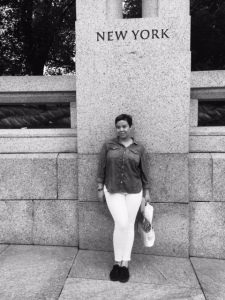 The next day had to include a stop at Ford Theatre where of course in true Father and Son fashion, they decided to recreate the expected crowd’s reaction during Lincoln’s dreadful night.

We walked here, we walked there, we walked everywhere. Rembrandts and Picassos at the Smithsonian, my dad, apparently a new found Art expert and a quick line into see airplanes and space shuttles, we hit all the highlights and fit in some Chick-fil-a. We had an authentic Italian dinner where I once again didn’t order first, something my brother and father never care to allow, but we shared laughs, speculated Obama’s White House activities and snap chatted our way into going over our data plan.

One lesson you always learn when you live away from your family is to appreciate any time you spend with them. New York City does it’s share of giving me adventures, but D.C. will always be a city where my Dad got some time with the people he is proud of the most. For as long as I can remember my dad has loved politics and the excitement of it all. It was the moment when I was watching my father read the quote’s of MLK Jr. on a stone wall that I knew he finally had a chance to have his children and other love all in one place and that was worth cheating on New York for. Until next time.